[6:02:58 PM] *** Group call ***
[6:09:52 PM] Thuan Thi Do: The force of Prâna, then, radiated from the sun, enters some atoms in the atmosphere and causes them to glow. Such an atom, charged with this additional life, has a sixfold power of attraction, so that it immediately draws round it six other atoms. These it arranges in a definite form, making what is termed in Occult Chemistry a hyper-meta-proto-element, a combination of matter on the sub-atomic sub-plane. This combination, however, differs from all others so far observed, in that the force which creates it and holds it together comes from the Second Aspect of the Solar Deity instead of from the Third. This form is known as the Vitality Globule, and is shown in the appended drawing, which is enlarged from that on p. 45 of Occult Chemistry. This little group is the exceedingly brilliant bead upon the male or positive snake in the chemical element oxygen, and it is also the heart of the central globe in radium.
[6:10:02 PM] Thuan Thi Do: 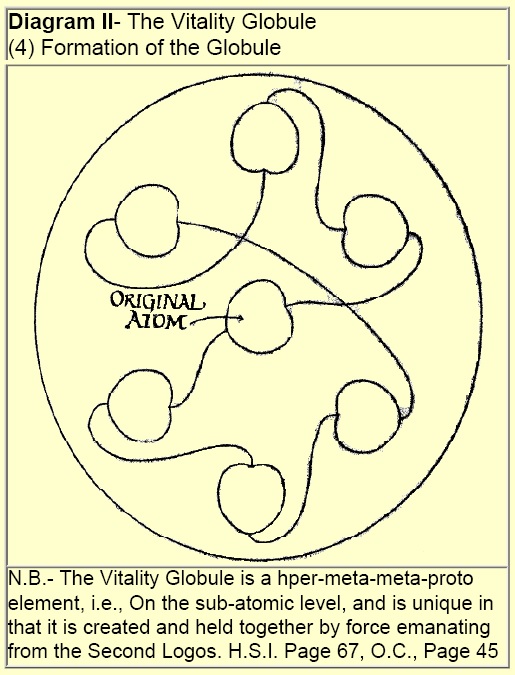 [6:10:31 PM] Thuan Thi Do: The globules, on account of their brilliance and extreme activity, can be seen by almost any one who cares to look, darting about in the atmosphere in immense numbers, especially on a sunny day. The best way to see them is to face directly away from the sun and focus the eyes a few feet away, with a clear sky as background. Brilliant as is the globule, it is almost colourless, and may be compared to white light.

It has already been remarked that although the force which vivifies these globules is quite different from light, it nevertheless appears to depend upon light for the power of manifestation. In brilliant sunshine this vitality is constantly welling up afresh, and the globules are generated in incredible numbers; but in cloudy weather there is a great diminution in the number of globules formed, and during the night the operation appears to be entirely suspended. During the night, therefore, we may be said to be living upon the stock manufactured during the previous day, and although it appears practically impossible that it should ever be entirely exhausted, that stock evidently does run low when there is long succession of cloudy days.

It is, of course the work of the physical elemental to defend the body and to assimilate vitality (as will be described in detail in the next chapter) in order to recuperate the physical body. Whilst the physical body is awake, the nerves and muscles are kept tense, ready for instant action. When the body is asleep, the elemental lets the nerves and muscles relax and devotes himself especially to the assimilation of vitality. This accounts for the strong recuperative power of sleep, even of a momentary nap.

The elemental works most successfully during the early part of the night, when there is a copious supply of vitality. In the daily cycle the supply of globules is at its lowest ebb in the small hours of the morning, before sunrise, and this is one reason why so large a proportion of deaths occurs during those hours. Hence also the saying that an hour’s sleep before midnight is worth two after it. Similarly of course, the supply of prâna is at a lower ebb in winter than in summer.

Further, Prâna is poured forth, not only on the physical, but also on all planes, emotion, intellect, and spirituality will be at their best under clear skies and with the inestimable aid of sunlight. It may also be added that even the colours of etheric prâna correspond to some extent to similar hues at the astral level. Hence right feeling and clear thought react on the physical and assist the latter to assimilate prâna and thus maintain vigorous health. We thus find an interesting light thrown on the intimate connection between spiritual, mental, and emotional health and the health of the physical body, and are reminded of the well-known saying of the Lord Buddha that the first step on the road to Nirvâna is perfect physical health.

The vitality globule, once charged, remains as a sub-atomic element, and does not appear to be subject to any change or loss of force unless and until it is absorbed by some living creature.

Before proceeding to study the extremely interesting and important subject of the absorption of Prâna in the physical body, we must first study the mechanism in the Etheric Double by means of which this process is effected.
[6:32:03 PM] Thuan Thi Do: CHAPTER III

In the Etheric Double, as well, incidentally, as in each of our other vehicles, there are certain Force-Centres, or Chakrams, as they are called in Sanskrit, this word meaning literally a wheel or revolving disc.

The Chakrams are situated on the surface of the Double, that is about a quarter of an inch outside the skin of the body. To clairvoyant sight they appear as vortices or saucer-like depressions of rapidly rotating matter.

The force flowing through the chakrams being essential to the life of the Etheric Double, every one possesses such force-centres, though the degree of their development varies considerably in individuals. Where they are undeveloped they glow dully and the etheric particles move sluggishly, just forming the vortex necessary for the transmission of the force, and no more: in developed people, on the other hand, the chakrams glow and pulsate, blazing with blinding brilliance like miniature suns. They vary in size from about two inches in diameter to about six inches.

In a new born baby they are tiny little circles like a three-penny piece – little hard discs scarcely moving at all, and only faintly glowing.

The etheric chakrams have two distinct functions. The first is to absorb and distribute Prâna, or Vitality, to the etheric and thence to the physical body, thus keeping these alive. The second function is to bring down into the physical consciousness whatever may be the quality inherent in the corresponding astral centre. It is the lack of development of the etheric centres which accounts for the failure to bring into the physical brain memory of astral experiences. Many people are fully awake and vividly conscious on the astral plane and lead active lives in their astral bodies.
[6:37:28 PM] Thuan Thi Do:

[6:38:22 PM] Thuan Thi Do: When however, they return to their sleeping physical bodies, scarcely any memory of the astral life filters through into the brain, simply because the necessary etheric bridge is not built. When the etheric centres are fully developed, there is full and continuous memory of astral experiences in the brain.

There appears to be no connection between the activity or development of the etheric chakrams and moral qualities: the two developments are quite distinct. 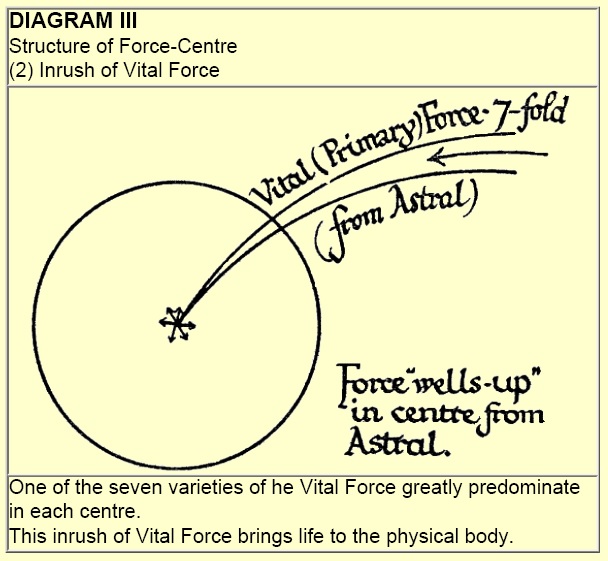 [6:56:14 PM] Thuan Thi Do: We have already seen (Chapter II ) that there are seven varieties of Prâna, all of which are present in all the chakrams; but in each chakram one of the varieties is always greatly predominant.

The Prâna rushes into the centre of each chakram from a direction at right angles to the plane of the chakram; “welling up” would perhaps be a better term, as the force comes from the astral plane into the etheric. From the centre of the chakram the force then radiates at right angles to the direction from which it came, i.e.., in the plane of the surface of the Etheric Double, in a number of directions, and in straight lines. The number of directions, which are similar to the spokes of a wheel, is different in each chakram.
[6:58:38 PM] Thuan Thi Do: 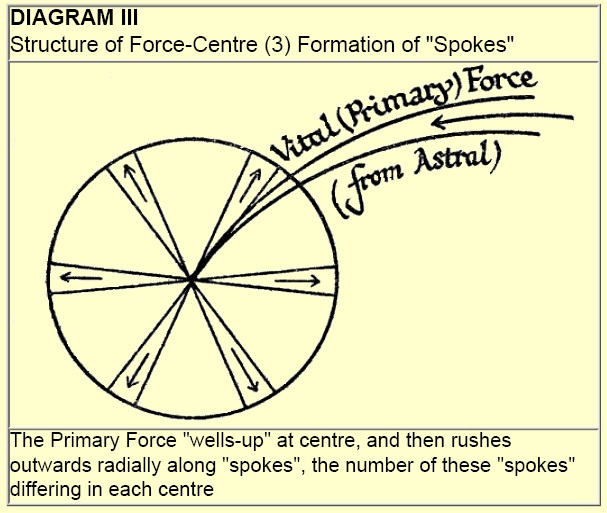 [7:03:15 PM] Thuan Thi Do: The spokes divide the chakram into a number of segments, like the petals of a flower; hence, in Hindu books, the chakrams are often described as resembling flowers.

Now somewhat as a bar-magnet thrust into a coil of wire will set up or “induce” a current of electricity in the wire at right angles to the axis of the magnet, so does the primary force of Prâna entering the chakram set up or induce secondary forces in the plane of the chakram. These secondary forces spin round the chakram, passing over and under the spokes, much as the material of the bottom of a circular basket passes over and under the ribs which radiate from the centre. 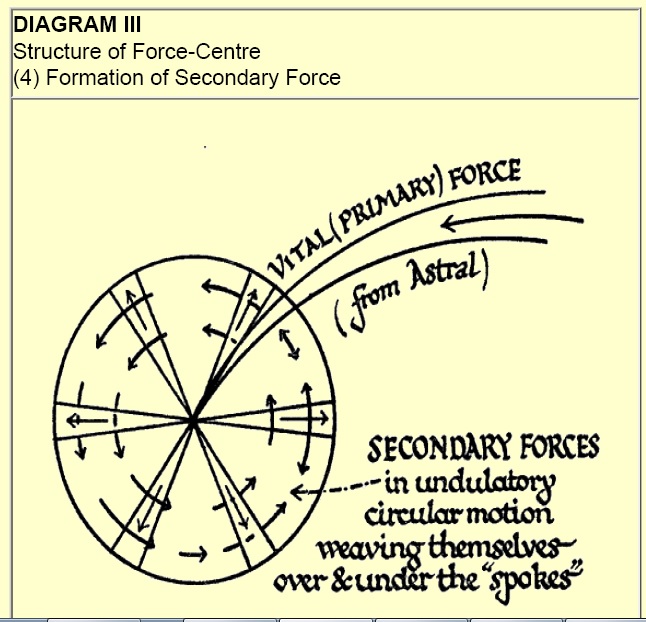