For the convenience and ready reference of the student, a summary of the processes described – 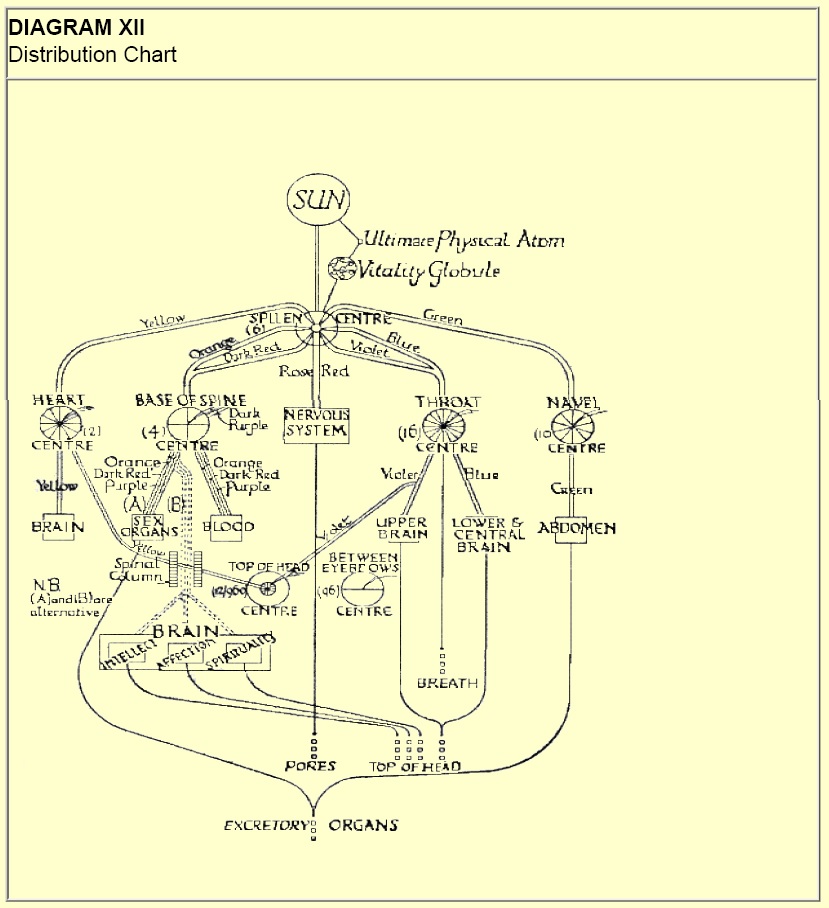 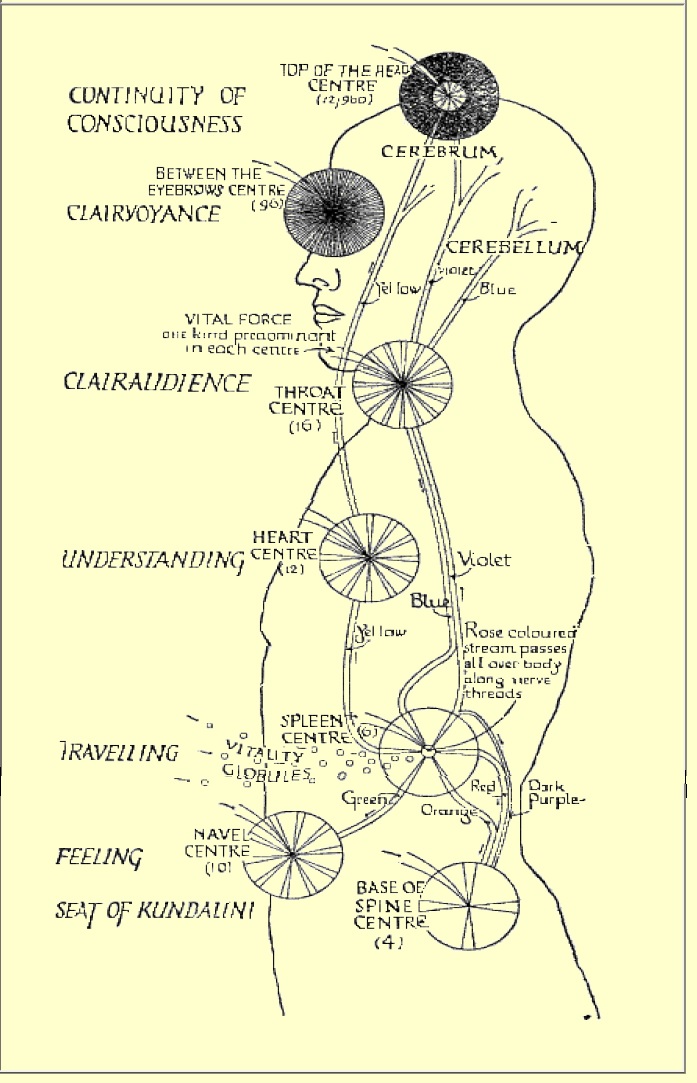 Chapters II to XI, is given in the tabular statement appended.

The same information is also given in the form of a Distribution Chart, which gives a synthesis of these processes in graphic form, from the emanation of Prâna from the sun to the discharge from the body of the particles from which the Prâna has been extracted.

In a still further diagram is shown an outline of the human body with the approximate position of the etheric centres, the streams of vitality and other useful information.

As we have already seen, Kundalini, or the Serpent-Fire, is one of the forces which emanate from the sun, and is entirely separate and distinct from both Fohat and Prâna, being so far as is known, incapable of being converted into any form of these other forces.

Kundalini has been variously called the Serpent-Fire, the Fiery Power, and the World’s Mother. To clairvoyant vision it appears in very truth like liquid fire as it rushed through the body, and the course through which it ought to move is a spiral one like the coils of a serpent. The name of the World’s Mother is appropriate because through it our various vehicles may be vivified.

An ancient symbol of the spinal column and Kundalini is that of the thyrsus, which is a staff with a pine cone on its top. In India the same symbol is found, but instead of the staff a stick of bamboo with seven knots is used, the knots of course representing the seven chakrams or force centres. In some modifications of the mysteries a hollow iron rod, said to contain fire, was used instead of the thyrsus. It is said that the modern barber’s pole, which is certainly a very ancient symbol, with its spiral bands and a knob at the end, has a similar significance, the modern barber being descended from the ancient chirurgeons or surgeons, who also practised alchemy, a science originally spiritual rather than material.

Kundalini exists on all planes of which we know anything, and it also appears to have seven layers of degrees of force.

The astral body originally was an almost inert mass, with only the vaguest consciousness, with no definite power of doing anything, and no clear knowledge of the world which surrounds it. Kundalini was then awakened at the astral level, in the centre corresponding to the base of the spine centre. It moved to the second centre, near the navel, and vivified it, thereby awakening in the astral body the power of feeling, of sensitiveness without definite comprehension.

Kundalini then passed to the third (spleen), fourth (heart), fifth (throat), sixth (eyebrows) and seventh (top of the head) centre in turn, awakening in each the various powers already described in previous chapters.

The mechanism by means of which we become aware of astral happenings is interesting and should be clearly grasped by the student. Although in the physical body we have special organs, each located in a definite and fixed part of the body, for seeing, hearing, and the rest, an entirely different arrangement is made in the astral body, specialised organs not being necessary for the attainment of the result aimed at.

The matter of the astral body is in a condition of constant movement, the particles flowing and swirling about like those of boiling water, and all of them pass in turn through each of the force-centres. Each of these centres then has the power of evoking from the particles of the astral body the ability to respond to a certain set of vibrations, corresponding to what in the physical world we call vibrations of light, sound, heat, and so forth. When therefore, the astral centres are vivified and in working order, they confer these various powers on the whole of the matter of the astral body, so that the latter is enabled to exercise its powers in every part of itself. Consequently a man functioning in his astral body can see equally well objects in front of him, behind, above and below. The chakrams or centres, therefore, cannot be described as organs of sense in the ordinary sense of that term, though they do convey the powers of sense to the astral body.

The method of awakening is precisely similar to that adopted in the astral body, i.e.., by arousing Kundalini, which lies dormant in etheric matter in the centre near the base of the spine.

The arousing is achieved by a determined and long-continued effort of the will, bringing the centre at the base of the spine into activity being, in fact, precisely the awakening of Kundalini. When once this is aroused, it is by its tremendous force that the other centres are vivified in turn. The effect on the centres is to bring into the physical consciousness the powers which were aroused by the development of the corresponding astral centres.

In order to bring about these results, however, it is necessary that the serpent-fire move to the chakrams in a certain order, and in a certain way, which varies with different types of people. Occultists who understand these matters from firsthand knowledge are always exceedingly careful to give no clue to the order in which the serpent-fire should be passed through the centres. The reason for this is on account of the very serious dangers, the gravity of which can scarcely be exaggerated, awaiting those who arouse Kundalini accidentally or prematurely. The most solemn warnings are uttered against attempting anything of the kind until the time is fully ripe and unless under the guidance of a Master or an experienced occultist.

Before Kundalini is aroused it is absolutely essential that a definite stage of moral purity be reached and also that the will be strong enough to control the force. Some of the dangers connected with the serpent-fire are purely physical. Its uncontrolled movement often produces intense physical pain, and it may readily tear tissues and even destroy physical life. It may also do permanent injury to vehicles higher than the physical.

One very common effect of arousing it prematurely is that it rushes downwards into the lower centres of the body instead of upwards, resulting in the excitation of the most undesirable passions, which are apt to be intensified to such a degree that it is quite impossible for the man to resist them. In the grip of such a force he is as helpless as a swimmer in the jaws of a shark. Such men become satyrs, monsters of depravity, being at the mercy of a force out of all proportion to the human power of resistance. It is probable that they will attain certain supernormal powers, but these will serve only to bring them into contact with subhuman beings with which humanity is intended to hold no commerce, and to escape from this thraldom may take more than one incarnation. There is a school of black magic which purposely uses this power in this way, but the lower force-centres which in this school are used are always left severely alone by followers of the Good Law or White Magic.

The premature unfoldment of Kundalini intensifies also everything in the nature, reaching in fact the lower evil qualities more readily than the good. Ambition, for example, in the mental body is very readily aroused and grows to an inordinate degree. Together with great intensification of intellectual power there comes abnormal and satanic pride. The force of the Kundalini is no ordinary force, but something resistless. If an uninstructed man has the misfortune to arouse it, he should at once consult someone who fully understands such matters. As the Hathayogapradipika says, “It gives liberation to Yogis and bondage to fools”.

There are some cases where Kundalini wakes spontaneously, so that a dull glow is felt: it may even, though rarely, begin to move of itself. In this case it would probably cause severe pain, as, since the passages are not prepared for it, it would have to clear its way by actually burning up a great deal of etheric dross, a process necessarily painful. In such cases the force would usually rush up the interior of the spine, instead of following the spiral course into which the occultist is trained to guide it. An effort of will should be made, if possible, to arrest such an upward rush, but if that proves to be impossible, as is most likely, it will probably rush out through the head and escape into the atmosphere probably doing no harm further than causing a slight weakening. It may also cause a temporary loss of consciousness. The really serious dangers, however, are connected, not with the upward, but with the downward rush.

As already briefly mentioned, the principal function of Kundalini in occult development is to pass through the etheric force centres and vivify these so that they bring through into the physical consciousness astral experiences. Thus The Voice of The Silence teaches that a vivification in this manner of the eyebrows centre enables one to hear the voice of the Master, that is, of the Ego or Higher Self. The explanation of this is that the pituitary body when fully working affords a perfect link between astral and physical consciousness.

The mastery of Kundalini has to be repeated in each incarnation, because in each life the bodies are new, but after it has once been thoroughly achieved, repetition becomes an easy matter.

Age does not appear to affect the development of the chakrams by means of Kundalini, but health is a necessity, as only a strong body could endure the strain.