THE CENTRE BETWEEN THE EYEBROWS

The sixth centre, that between the eyebrows, has ninety-six spokes. In Indian books, however, it is mentioned as having only two petals, this being probably due to the fact that it presents the appearance of being divided into halves. Of these, the one is predominantly rose-coloured, though with a great deal of yellow in it, and the other predominantly a kind of purplish-blue. 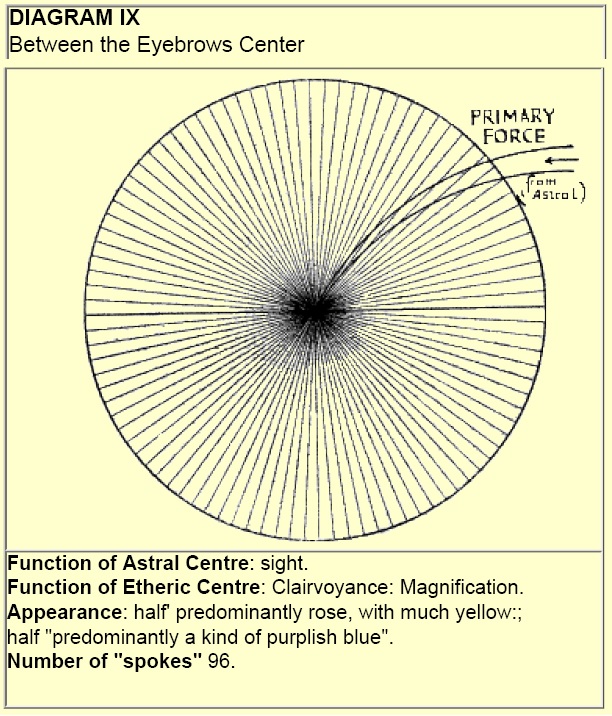 The writer has been unable to find any specific description of the source of the Prânic stream which flows into this centre, though it is mentioned in The Inner Life, p. 449, that the purplish-blue appearance of one half of the centre agrees closely with the colours of the special types of vitality that vivify it. This would seem to indicate the dark blue (and violet?) ray which passes the throat centre and proceeds to the brain.

The development of the corresponding astral centre confers the power to perceive definitely the nature and shape of astral objects, instead of vaguely sensing their presence.

The awakening of the etheric centre cause a man to see objects, and to have various sorts of waking visions of places or people. When just beginning to awaken, landscapes and clouds of colour are half-perceived. When fully developed it brings about clairvoyance.

The remarkable faculty of magnification of vision, or its converse, is associated with this centre, and will be described in the chapter on Etheric Sight.

In Sanskrit this centre is known as Ajn•.

THE CENTRE AT THE TOP OF THE HEAD

This centre, the seventh, situated at the top of the head, is somewhat different in construction from the other six. It is described in Indian books as the thousand-petalled lotus, though the actual number of radiations of the primary force is 960. In addition to this, it possesses a sort of subsidiary whirlpool or minor activity in its central portion, which has twelve undulations of its own.

When fully alive, this chakram is perhaps the most resplendent of all, full of indescribable chromatic effects and vibrating with almost inconceivable rapidity. The central portion is gleaming white, flushed with gold in its heart.

The centre receives in its outer portion the violet ray which passes through the throat centre, while in its central portion it receives the yellow ray from the heart centre.

The arousing of the corresponding astral centre rounds off and completes the astral life, endowing a man with the perfection of his faculties.

With one type of individual, the astral chakrams corresponding to the sixth and seventh etheric chakrams both converge upon the pituitary body, the latter organ being practically the only direct link between the physical and higher planes.

With another type of person however, while the sixth chakram is still attached to the pituitary body, the seventh is bent or slanted until it coincides with the atrophied organ known as the pineal gland, which with people of this type becomes a line of direct communication with the lower mental, without apparently passing through the intermediate astral plane in the ordinary way. This explains the emphasis sometimes laid on the development of the pineal gland. 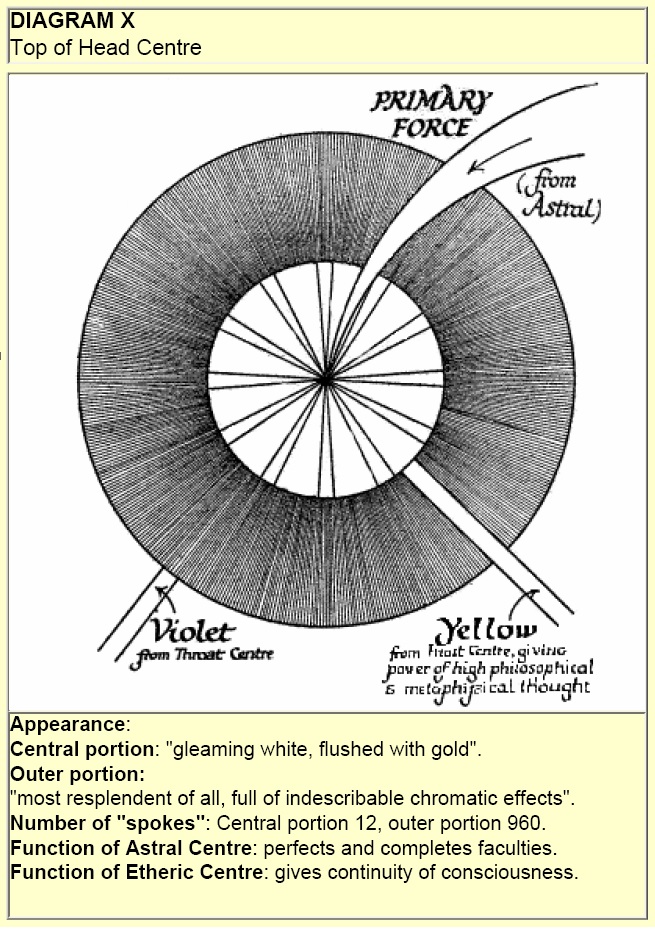 The awakening of the etheric centre enables a man through it to leave the physical body in full consciousness, and also to re-enter it without the usual break, so that his consciousness will be continuous through night and day.

The real reason for tonsure, as practised by the Roman Church, was to leave uncovered the brahmarandra chakram, so that there might be not even the slightest hindrance in the way of psychic force which in their meditations the candidates were intended to try to arouse.

Just as the dense physical body uses up its materials, and discharges its waste products through the five excretory organs – the skin, lungs, liver, intestines and kidneys – so does the etheric body use up the material with which it is supplied, through physical food and the absorption of the Vitality Globule, and discharge its waste particles in various ways.

A Chart of these discharges is appended, the results it shows being described as follows.

Through the breath and the pores of the skin are expelled both the bluish-white particles from which the Prâna has been extracted, such particles still charged with rose-coloured Prâna as are superfluous to the requirements of the body, and also the atoms from the blue rays used by the throat centre.

Through the excretory organs pass the emptied atoms of the green ray, from the digestive system, and also, in the case of the ordinary man, those of the red-orange ray.

Through the top of the head pass the atoms from the dark blue and violet rays.

In a developed person, however, who has achieved the deflection upwards of the red-orange ray, the particles from this ray are discharged through the top of the head. These form a fiery cascade, frequently shown as a flame in ancient statues of Buddha and other saints.

Atoms which have been emptied of Prâna become once more precisely like any other atoms. Some of them are absorbed by the body and enter into the various combinations which are constantly being made, while others which are not required are thrown off through any convenient channel. 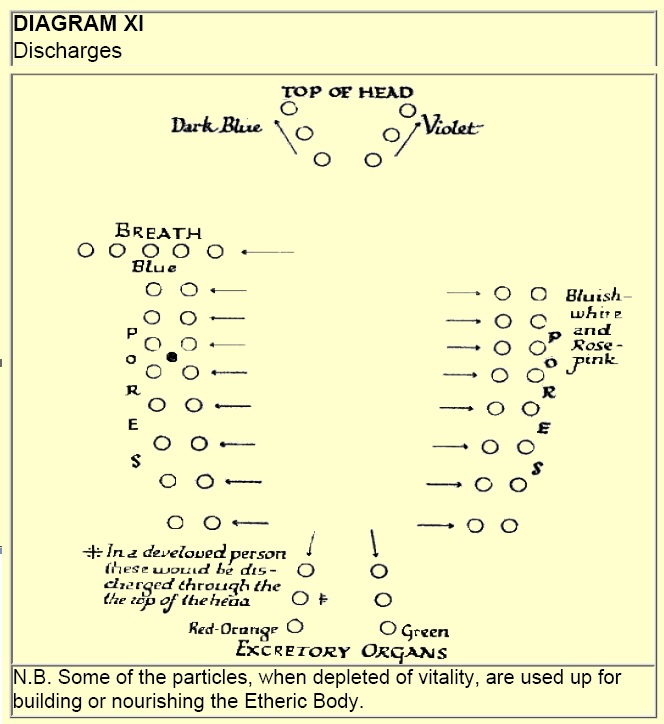 In addition to the above, the matter of the Etheric Double itself is also constantly being thrown out of the body through the pores of the skin, just as is gaseous matter. Consequently persons who are near one another are liable to absorb each other’s etheric emanations.

The radiation of etheric matter is strongest from the ends of the fingers and toes: hence great importance of scrupulous cleanliness in these parts of the body: a person with dirt under the finger nails, for example, is continually pouring forth a stream of unhealthy influence into the etheric world.

The physical emanations of the body, consisting largely of finely-divided salts, appear to clairvoyant sight as multitudes of tiny forms, such as dice, stars, and double pyramids. The character of these tiny particles may be affected by loss of health, by a wave of emotion, or even a definite train of thought. In this connection Professor Gates is reported as saying (a) that the material emanations of the living body differ according to the states of the mind as well as the conditions of physical health; (b) that these emanations can be tested by the chemical reactions of some salts of selenium; (c) that these reactions are characterised by various tints or colours according to the nature of the mental impressions; (d) that forty different emotionproducts, as he calls them, have already been obtained.