Kỳ này, về Causal Body chúng ta có thể học đoạn sau:
The First Ray man would attain his object by sheer force of resistless will, without condescending to employ anything in the nature of means at all.
The Second Ray man would also work by force of will, but with the full comprehension of the various possible methods, and the conscious direction of his will into the channel of the most suitable one.
The Third Ray Man would use the forces of the mental plane, noticing very carefully the exact time when the influences were most favourable to success.
The Fourth Ray Man would employ the finer physical forces of the ether.
The Fifth Ray man would set in motion the currents of what used to be called the astral light.
The Sixth Ray man would achieve his result by the strength of his earnest faith in his particular Deity, and in the efficacy of prayer to Him.
The Seventh Ray man would use elaborate ceremonial magic, and probably invoke the aid of non human spirits, if possible.
In attempting the cure of disease:-The First Ray man would simply draw health and strength from the great fountain of Universal Life. The Second Ray man would thoroughly comprehend the nature of the malady, and know precisely
how to exercise his will-power upon it to the best advantage.
The Third Ray man would invoke the Great Planetary Spirits, and choose a moment when astrological influences were beneficent for the application of his remedies. The Fourth Ray man would trust chiefly to physical means, such as massage. The Fifth Ray man would employ drugs. The Sixth Ray man would employ faith-healing.( Page 325 ) The Seventh Ray man would use mantras, or magical invocations. Beyond the Chohan Initiation, on Rays Three to Seven, the highest Initiation that can be taken on
our globe is that of the Mahachohan: it is possible, however, to go further on the First and Second Rays, as is indicated in the following table of Initiations, in which it will be seen that the Buddha initiation is possible on the Second and First Rays, and that the Adept may go still further on the First.

In this great Triangle, the Lord of the World and the Lord Buddha are different from the Mahachohan, being engaged in work that does not descend to the physical plane, but only to the level of the buddhic body, in the case of the Lord Buddha, and the atmic plane, in that of the Lord of the World. Yet, without Their work, none of that at lower levels would be possible, so They provide for the transmission of Their influence, even to the lowest plane, through Their representatives, the Manu and the Bodhisattva, respectively. ( Page 327 )
The Manu and the Bodhisattva stand parallel with the Mahachohan, thus forming another Triangle, to administer the powers
of the Logos down to the physical plane. These two triangles are expressed in Diagram XLIV. 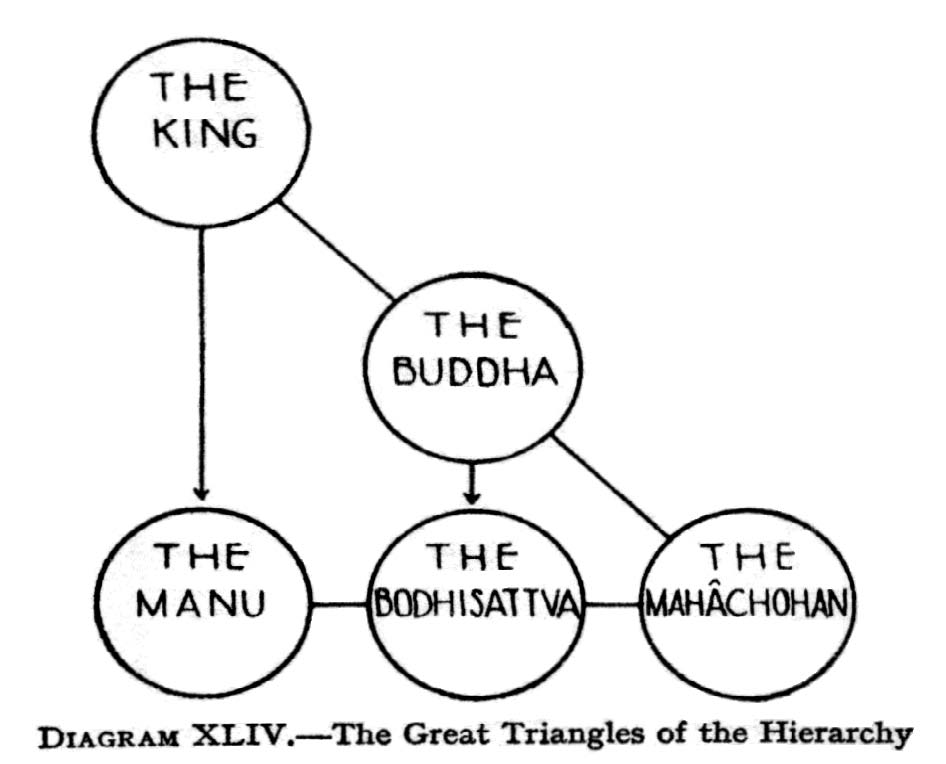 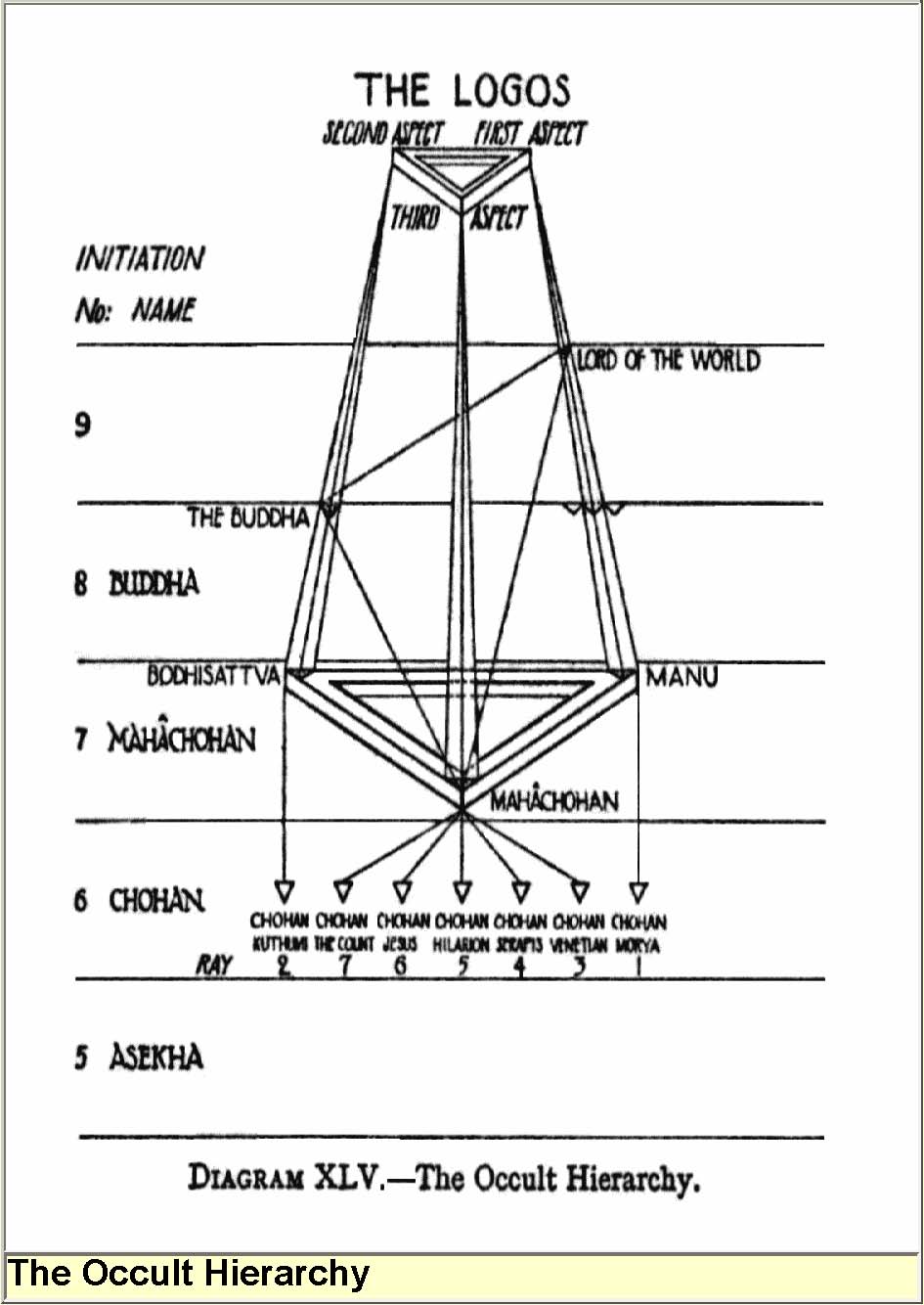 The various relationships described above are summarised in Diagram XLV, which is reproduced, with very slight modifications, from The Masters and the Path.

Now the Monadic, or rather Cosmic, Essence (if such a term be permitted) in the mineral, vegetable, and animal, though the same throughout the series of cycles from the lowest elemental up to the Deva Kingdom, yet differs in the scale of progression. It would be very misleading to imagine a Monad as a separate Entity trailing its slow way in a distinct path through the lower Kingdoms, and after an incalculable series of transformations flowering into a human being; in short, that the Monad of a Humboldt dates back to the Monad of an atom of horneblende. Instead of saying a “Mineral Monad,” the more correct phraseology in physical Science, which differentiates every atom, would of course have been to call it “the Monad manifesting in that form of Prakriti called the Mineral Kingdom.” The atom, as represented in the ordinary scientific hypothesis, is not a particle of something, animated by a psychic something, destined after aeons to blossom as a man. But it is a concrete manifestation of the Universal Energy which itself has not yet become individualized; a sequential manifestation of the one Universal Monas. The ocean (of matter) does not divide into its potential and constituent drops until the sweep of the life-impulse reaches the evolutionary stage of man-birth. The tendency towards segregation into individual Monads is gradual, and in the higher animals comes almost to the point. The Peripatetics applied the word Monas to the whole Kosmos, in the pantheistic sense; and the Occultists, while accepting this thought for convenience sake, distinguish the progressive stages of the evolution of the concrete from the abstract by terms of which the “Mineral, Vegetable, Animal, (etc.), Monad” are examples. The term merely means that the tidal wave of spiritual evolution is passing through that arc of its circuit. The “Monadic

Essence” begins to imperceptibly differentiate towards individual consciousness in the Vegetable Kingdom. As the Monads are uncompounded things, as correctly defined by Leibnitz, it is the spiritual essence which vivifies them in their degrees of differentiation, which properly constitutes the Monad — not the atomic aggregation, which is only the vehicle and the substance through which thrill the lower and the higher degrees of intelligence.
Leibnitz conceived of the Monads as elementary and indestructible units endowed with the power of giving and receiving with respect to other units, and thus of determining all spiritual and physical phenomena. It is he who invented the term apperception, which together with nerve- (not perception, but rather) — sensation, expresses the state of the Monadic consciousness through all the Kingdoms up to Man.
Thus it may be wrong on strictly metaphysical lines to call Atma-Buddhi a monad, since in the materialistic view it is dual and therefore compound. But as Matter is Spirit, and vice versa; and since the Universe and the Deity which informs it are unthinkable apart from each other; so in the case of Atma-Buddhi. The latter being the vehicle of the former, Buddhi stands in the same relation to Atma, as Adam-Kadmon, the Kabalistic Logos, does to En-Soph, or Mulaprakriti to Parabrahm.
A few words more of the Moon.
What, it may be asked, are the “Lunar Monads,” just spoken of? The description of the seven classes of Pitris will come later, but now some general explanations may be given. It must be plain to everyone that they are Monads, who, having ended their life-cycle on the lunar chain, which is inferior to the terrestrial chain, have incarnated on this one. But there are some further details which may be added, though they border too closely on forbidden ground to be treated of fully. The last word of the mystery is divulged only to the adepts, but it may be stated that our satellite is only the gross body of its invisible principles. Seeing then that there are 7 Earths, so there are 7 Moons, the last one alone being visible; the same for the Sun, whose visible body is called a Maya, a reflection, just as man’s body is. “The real Sun and the real Moon are as invisible as the real man,” says an occult maxim.
And it may be remarked en passant that those ancients were not so foolish after all who first started the idea of “the seven moons.” For though

this conception is now taken solely as an astronomical measure of time, in a very materialised form, yet underlying the husk there can still be recognised the traces of a profoundly philosophical idea.
In reality the Moon is only the satellite of the Earth in one respect, viz., that physically the Moon revolves round the Earth. But in every other respect it is the Earth which is the satellite of the Moon, and not vice versa. Startling as the statement may seem it is not without confirmation from scientific knowledge. It is evidenced by the tides, by the cyclic changes in many forms of disease which coincide with the lunar phases; it can be traced in the growth of plants, and is very marked in the phenomena of human gestation and conception. The importance of the Moon and its influence on the Earth were recognized in every ancient religion, notably the Jewish, and have been remarked by many observers of psychical and physical phenomena. But, so far as Science knows, the Earth’s action on the Moon is confined to the physical attraction, which causes her to circle in her orbit. And should an objector insist that this fact alone is sufficient evidence that the Moon is truly the Earth’s satellite on other planes of action, one may reply by asking whether a mother, who walks round and round her child’s cradle keeping watch over the infant, is the subordinate of her child or dependent upon it; though in one sense she is its satellite, yet she is certainly older and more fully developed than the child she watches.
It is, then, the Moon that plays the largest and most important part, as well in the formation of the Earth itself, as in the peopling thereof with human beings. The “Lunar Monads” or Pitris, the ancestors of man, become in reality man himself. They are the “Monads” who enter on the cycle of evolution on Globe A, and who, passing round the chain of planets, evolve the human form as has just been shown. At the beginning of the human stage of the Fourth Round on this Globe, they “ooze out” their astral doubles from the “ape-like” forms which they had evolved in Round III. And it is this subtle, finer form, which serves as the model round which Nature builds physical man. These “Monads” or “divine sparks” are thus the “Lunar” ancestors, the Pitris themselves. For these “Lunar Spirits” have to become “Men” in order that their “Monads” may reach a higher plane of activity and self-consciousness, i.e., the plane of the Manasa-Putras, those who