THE ATTACHMENT OF THE ATOMS:

The Second Outpouring not only, as we saw in the proceeding chapter, streams, forth into the five planes, thereby bringing into existence the elemental and other kingdoms of life, but it brings also with it into activity the Monads, who while ready to begin their evolution, have been waiting on the Anupadaka, plane until the matter of the planes was prepared for them.

To say that the Monads "go forth" would be somewhat inaccurate. It is rather that they shine forth, sending out their rays of life. They themselves remain ever "in the bosom of the Father" , while their life-rays stream out into the ocean of matter, appropriating there, as we shall see in full detail presently the materials necessary for their evolution in the lower planes.

The shining forth of the Monads has been graphically described by H.P. Blavatsky, thus: "The primordial triangle [i.e.., The three faced Monad of Will, Wisdom, and Activity] as soon as it has reflected itself in the "Heavenly Man" [i.e..,Atma, Buddhi, Manas] the highest of the lower seven - disappears, returning, into "Silence and Darkness".

The Monads themselves, therefore remain ever beyond the fivefold universe, and in that sense are spectators. They dwell beyond the five planes of matter. They are the Self, standing Self-conscious, and Self determined. They reign in changeless peace and live in eternity. But, as we have seen, they appropriate matter, taking to themselves atoms of various planes.

The Monads are of seven types or "rays" just as matter also is of seven types or rays. The process by which the seven types arise is as follows: The three aspects of consciousness of the Logos or Universal Self, are Will [Ichchha], Wisdom [Jnanam], and Activity [Kriya]. The three corresponding, qualities in matter are Inertia [Tamas], Mobility [Rajas] and Rhythm, [Sattva].

These are related as follows: The Aspect of Will imposes on matter the quality of Inertia or Tamas, the power of resistance, stability, quietude. 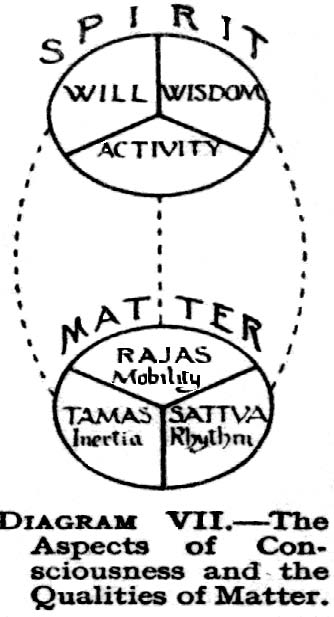 Now every Monad has these three aspects of consciousness, the proportions, of which may vary in different Monads in seven ways: thus:
[4/26/2014 6:21:53 PM] Thuan Thi Do:

DIAGRAM VIII is an attempt to show the seven types of monads with the seven corresponding types of matter.


Nevertheless, although as has been said, each Monad belongs fundamentally, to one Ray, yet he has within himself something of all the Rays . There is in him no ounce of force, no grain of matter, which is not actually part of one or other of the Seven Planetary Logoi. He is literally compacted of Their very substance, not of one, but of all, though always one predominates. Therefore, no slightest movement of any of these great Star Angels can occur without affecting to some extent every Monad, because they

Their flesh, Spirit of Their Spirit. This fact is, of course, the real basis of astrology.

Furthermore, the bodies of those Monads, which originally came forth through, a given Planetary Logos, will continue all through their evolution to have more of the particles of that Logos than of any other, and in this way men can be distinguished as primarily belonging to one or other of the seven Rays or Logoi.

Whilst the ordinary rule is that a Monad remains on the same Ray throughout the whole of his evolution, so that he eventually returns through the same Planetary Angel as that through which he first came forth, yet there are comparatively, rare exceptions. For it is possible for a Monad to change his Ray so that he will return through a Planetary Angel other than that through which he first emerged. Such transfers are usually to the First and Second Rays there being relatively few persons on those two Rays at the lower levels of evolution.

Before we can proceed to describe the method by which the atoms are attached, to the Monads, there is still another factor with which we must first deal.

The Second Outpouring , in addition to its work of forming the Elemental and other Kingdoms, also brings with it evolved beings, at various stages of development, who form the normal and typical inhabitants of the Three Elemental Kingdoms. These beings have been brought over by the Logos from a preceding evolution. They are now sent forth to inhabit the plane for which their development fits them; they co-operate with the work of the Logos, and later with man, in the general scheme of evolution. From them, man derives his perishable bodies.

They are known in some religions as Angels, to Hindus as Devas—meaning literally, Shining Ones. Plato speaks of them as "Minor Gods". It is the translation of the word "Deva" as "Gods" which has led to much misapprehension of Eastern thought. The "thirty-three crores [330 millions] of Gods", are not Gods in the Western sense of the term, but are Devas or Shining Ones.

Of these there are many grades, including representatives on each of the five lower planes, i. e.., those of Atma, Buddhi, Manas, Kama, and the etheric part of the physical plane.

Their bodies are formed of the Elemental Essence of the Kingdom to which they belong, and are flashing and many-hued, changing form at the will of the entity Himself. They form a vast host, ever actively at work, labouring at the Elemental Essence to improve its quality, taking it to form their own bodies, throwing it off again and taking other portions, so as to render it more sensitive.

At the stage which we are now considering, this work of improving the Elemental Essence, is the only work there is for them to do. Later on, they are also constantly busied in the shaping of forms, in aiding human egos on the way to incarnation in building their new bodies, bringing materials of the kind required and helping in its arrangements. The less advanced the ego, the greater the directive work of the Devas. With animals they do almost all the work, and practically all with the vegetables and minerals. They are the active, agents of the Logos, carrying out all details of His world-plan, and aiding, the countless evolving lives to find materials they need for their clothing and use. Included with them are the vast numbers of the fairy kingdom, known as nature spirits, trolls, gnomes, and by countless other names.

Some description of these hosts of beings is given in The Astral Body and The Mental Body, so that there is no need to describe them further here. All we are really concerned with at the moment is their origin, and the part they play in helping the Monads to commence their evolution in the lower planes.

The term Deva is, strictly speaking, not wide enough to cover all the living agencies which are employed in the work connected with the Monads and their long pilgrimage through the lower worlds. This work is carried out by no less than seven orders of beings, known collectively as Creative Hierarchies, the Monads, themselves, curiously enough, being one of the seven.

For our present purposes, however, in order not to make the description too complicated and involved, we shall denote all these agencies by the single term Devas. In a later and separate chapter we shall to some extent go over the ground again more in detail, and give the names and functions [so far as these are known] of the seven Creative Hierarchies.

Thus we see that before any embodied consciousness, save that of the Logos and His Creative Hierarchies, could appear, or do anything at all, a vast preliminary work had to be accomplished, preparing the "form-side" of the field of evolution.

We have now the three factors needed to enable us to consider the attachment, of the atoms to the Monads: these three are:

[1] the atoms of the various, planes;

[2] the readiness of the Monads themselves on the Anupadaka plane;

[3] the assistance of the Devas, without whom the Monads by themselves, would be powerless to carry out their evolution.

A Monad, as we have seen, possesses three aspects of consciousness, each of which, when the time comes for evolutionary process to begin, sets up what may be termed a vibratory wave, thus causing to vibrate the atomic matter of the planes of Atma, Buddhi, and Manas, which surrounds him.

Devas from a previous universe, who have themselves passed through a similar, experience before, guide the vibratory wave from the Will-aspect of the Monad, to an atom of Atma, which thus becomes "attached" to the Monad, and is its Atmic permanent atom, so called because it remains with the Monad throughout the whole process of evolution.

Similarly, the vibratory wave from the Wisdom aspect of the Monad is guided, by Devas to an atom of Buddhi, which becomes the Buddhic permanent, atom.

Similarly, also, the vibratory wave from the Activity-aspect of the Monad is guided by Devas and attached to an atom of Manas, which becomes the third permanent atom. Thus is formed Atma-Buddhi-Manas, often called the Ray of the Monad. 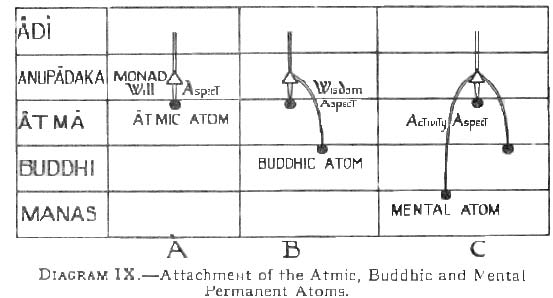 [4/26/2014 6:33:46 PM] Thuan Thi Do: As said, those atoms which are attached to Monads become, and are called, "permanent atoms"; H.P. Blavatsky spoke of them as "life atoms" [ The Secret Doctrine, II,709].The remainder of the atoms of the various planes, which are not attached to Monads, remain and continue to be called the Monadic Essence of each plane. The term is perhaps a little misleading, but it was given in the first instance, because [as mentioned in chapter V] the essence at this stage is suitable to be attached to Monads as permanent atoms, though by no means all of it does actually become attached.

Atma-Buddhi-Manas, the Ray of the Monad, is known also by many other names; such as the Heavenly Man, the Spiritual or Higher Triad, the Higher Self, the separated Self, and so on. The term Jivatma is also sometimes applied to it, though Jivatma, which may be rendered literally Life-Self, is of course equally applicable to the Monad. It is known also as the "manhood" of the Divine Son of the First Logos, animated by the "Godhead," i.e., by the Monad. It may be regarded also as a vessel into which the Monad pours His life.
[4/26/2014 6:33:58 PM] Thuan Thi Do: 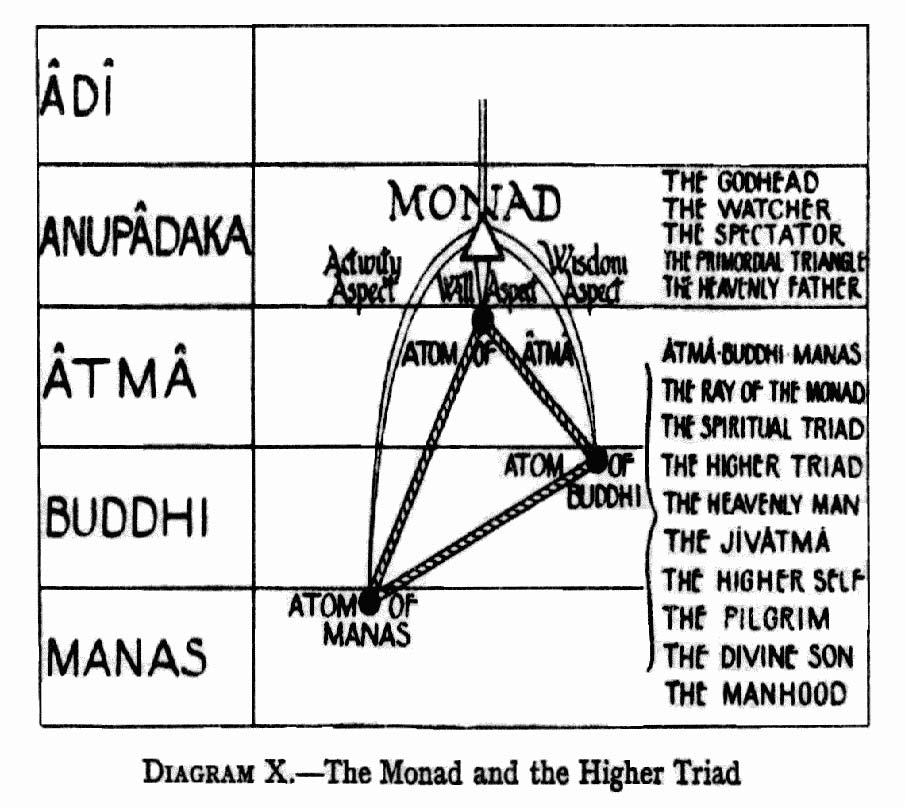 It is important to remember that Atma-Buddhi-Manas, the Higher Triad, is identical in nature with the Monad, in fact is the Monad, though lessened in force by the veils of matter round it. This lessening of power must not blind us to the identity of nature, for it must ever be born in mind that human consciousness is a unit, though its manifestations vary owing to the predominance of one or other of its aspects and to the relative density of the materials in which an aspect is working at any given moment.

The Monad having thus appropriated for his own use these three atoms, has begun his work. He himself in his own nature, cannot descend below the Anupadaka plane; hence he is said to be in "Silence and Darkness", i.e., unmanifest. But he lives and works in and by means of the atoms he has appropriated.

Although the Monad on his own plane, the Anupadaka , so far as his internal, life is concerned, is strong, conscious, capable, yet on the lower planes in their time and space limitations, he is a mere germ, an embryo, powerless, senseless, helpless. Although at first the matter of the lower planes enslaves, him, he will slowly, surely, mould it for Self-expression. In this he is watched over and aided by the all sustaining and preserving life of the Second Logos, until eventually he can live in the lower worlds as fully as he lives above, and become in his turn a creative Logos, and bring forth out of himself, a universe. For a Logos does not create out of nothing: He evolves all from Himself.