[5:58:29 PM] *** Group call ***
[6:01:23 PM] Thuan Thi Do: It must also be born in mind that etheric matter, though invisible to ordinary sight, is still purely physical, and can therefore be affected by cold and heat, and also powerful acids.

Persons who have lost a limb by amputation sometimes complain that they can feel pain at the extremities of the amputated limb, i.e., at the place where the limb used to be.

This is due to the fact that the etheric portion of the limb is not removed with the dense physical portion, but can still be seen in its place by clairvoyant sight, and therefore, under suitable stimulus, sensations can be aroused in this etheric limb and transmitted to the consciousness.

There are a large number of other phenomenon connected with the Etheric Double, its extrusion from the dense body, its emanations, and so forth, but these can be dealt with more conveniently and satisfactorily at a later stage, after we have studied the nature and methods of working Prâna, or Vitality.
[6:02:50 PM] Thuan Thi Do: http://thongthienhoc.net/English/etheric/ThePhachE.htm
[6:06:54 PM] Thuan Thi Do: CHAPTER II

It is known to occultists that there are at least three separate and distinct forces which emanate from the sun and reach our planet. There may be countless other forces, for all we know to the contrary, but at any rate we know of these three. They are : -

Fohat, or Electricity
Prâna, or Vitality
Kundalini, or Serpent-Fire
Fohat or Electricity, comprises practically all the physical forces of which we know, all of which are convertible into one another, such as electricity, magnetism, light, heat, sound, chemical affinity, motion, and so forth.

Prâna, or Vitality, is a vital force, the existence of which is not yet formally recognised by orthodox Western scientists, though probably a few of them suspect it.

Kundalini, or Serpent-Fire, is a force known as yet only to very few. It is entirely unknown and unsuspected by orthodox Western science.

These three forces remain distinct, and none of them can at this level be converted into either of the others. This is a point of great importance, which the student should clearly grasp.

Further, these three forces have no connection with the Three Great Outpourings; the Outpourings are definite efforts made by the Solar Deity. Fohat, Prâna and Kundalini, on the other hand, seem rather the results of His Life, His qualities in manifestation without any visible effort.

[ Since this document was compiled, The Chakras by C.W.Leadbeater, has appeared. In The Chakras it is stated that the three forces mentioned are connected with the Outpourings, as follows:

The First Outpouring, from the Third Logos, is the Primary force which manufactured the chemical elements. This appears to be Fohat. The Second Outpouring, form the Second Logos, has Prâna as one of its aspects. Kundalini is a further development, on the ascending arc, of the First Outpouring ]
[6:11:38 PM] Thuan Thi Do: http://thongthienhoc.net/English/etheric/etheric3.jpg
[6:25:38 PM] Thuan Thi Do: Prâna is a Sanskrit word, derived from pra, forth, and an, to breathe, move, live. Thus pra-an, Prâna, means to breathe forth, life-breath or life-energy being the nearest English equivalents of the Sanskrit term. As, in Hindu thought, there is but one Life, one Consciousness, Prâna has been used for the Supreme Self, the energy of the One, the Life of the Logos. Hence, Life on each plane may be spoken of as the Prâna of the plane, Prâna becoming the life-breath in every creature.

“I am Prâna… Prâna is life,” says Indra, the great Deva who stands as the Head of the hierarchy of the life in the lower world. Prâna here clearly means the totality of the life-forces. In the Mundakopanishat it is stated that from Brahman the One comes Prâna – or Life. Prânais also described as Âtmâ in its outgoing activity: “From Âtmâ this Prâna is born” (Prashnopanishat). Shankara says that Prâna is Kriyâshakti – the Shakti of doing, not of knowing. It is classed as one of the seven Elements, which correspond to the seven regions of the universe, the seven sheaths of Brahman, and so forth. These are: Prâna, Manas, Ether, Fire, Air, Water, Earth.

The Hebrews speak of the “breath of life”, which they call Nephesch, breathed into the nostrils of Adam. Nephesch, however, is not strictly speaking Prâna alone, but Prâna combined with the next principle, Kâma. These together make the “vital spark” that is the “Breath of life in man, in beast or insect, of physical, material life. “
[6:25:42 PM] Thuan Thi Do: Translated into more Western terms, Prâna, on the physical plane, is best described as Vitality, as the integrating energy that co-ordinates the physical molecules, cells, etc., and holds them together as a definite organism. It is the life-breath within the organism, the portion of the universal Life-Breath, appropriated by a given organism during the period of bodily existence that we speak of as “a life.”Were it not for the presence of Prâna, there could be no physical body as an integral whole, working as one entity; without Prâna the body would be nothing more than a collection of independent cells. Prâna links up and connects these into one complex whole, playing along the branches and meshes of the “life-web,” that shimmering golden web of inconceivable fineness and delicate beauty, formed out of a single thread of buddhic matter, a prolongation of the Sûtrâtma, within the meshes of which the coarser atoms are built together.

Prâna is absorbed by all living organisms, a sufficient supply of it seeming to be a necessity of their existence. It is not, therefore, in any sense a product of life, but the living animal, plant, etc., are its products. Too great an exuberance of it in the nervous system may lead to disease and death, just as too little leads to exhaustion and ultimately death.

H.P. Blavatsky compares Prâna, the active power producing all vital phenomena, to oxygen, the supporter of combustion, the life-giving gas, the active chemical agent in all organic life. A comparison is also drawn between the Etheric Double, the inert vehicle of life, and nitrogen, an inert gas with which oxygen is mixed to adapt the latter for animal respiration, and which also enters largely into all organic substances.
[6:29:39 PM] Thuan Thi Do: The fact that the cat is pre-eminently endowed with prâna has given rise to the popular idea of the cat having “nine lives”, and appears to have been indirectly connected with the reasons for this animal being regarded in Egypt as sacred.

On the physical plane prâna builds up all minerals, and is the controlling agent in the chemicophysiological changes in protoplasm, which lead to differentiation and the building of the various tissues of bodies and plants, animals and men. They show its presence by the power of responding to stimuli.

The blending of astral with physical prâna creates nerve-matter which is fundamentally the cell, and which gives the power to feel pleasure and pain. The cells develop into fibres, as the result of thought, the prâna pulsating along those fibres being composed of physical, astral and mental prâna.

This is as far as normal humanity has progressed. Certain Yoga practices (in the use of which great caution is required, lest injury should be inflicted on the brain) bring about the development of the fifth and sixth set of spirillæ, which serve as channels for higher forms of consciousness.
[6:34:35 PM] Thuan Thi Do: https://www.google.com/search?q=spirilla+bacteria+diseases&rlz=1C1KMZB_enUS528US528&oq=spiril&aqs=chrome.5.69i57j0l5.14566j0j8&sourceid=chrome&espv=210&es_sm=122&ie=UTF-8#es_sm=122&espv=210&q=spirill%C3%A6
[6:43:56 PM] Thuan Thi Do: The seven spirillæ in the atom must not be confused with the “whorls,” of which there are ten, three coarser and seven finer. In the three coarser whorls flow currents of different electricities, whilst the seven finer whorls respond to etheric waves of all kinds – sound, light, heat, etc.

The Secret Doctrine speaks of Prâna as the “invisible” or “fiery” lives which supply the microbes with “vital constructive energy,” thus enabling them to build the physical cells, the size of the smallest bacterium relatively to that of a “fiery life” being as that of an elephant to the tiniest infusoria. “Every visible thing in the universe was built by such lives, from conscious and divine primordial man, down to the unconscious agents that construct matter.” “By the manifestation of Prâna, the spirit which is speechless appears as the speaker.

The whole constructive vitality, in the universe and in man, is thus summed up as Prâna.

The Secret Doctrine also speaks of a “fundamental dogma” of occult science, that the Sun is the storehouse of Vital Force, and that from the sun issue those life-currents which thrill through space, as through the organisms of every living thing on earth. Paracelsus thus referred to Prâna : “The whole of the Microcosm is potentially contained in the Liquor Vitæ, a nerve fluid …in which is contained the nature, quality, character, and essence of all beings.” Paracelsus also spoke of it as the Archæus. Dr. B. Richardson, F.R.S., wrote of it as “nervous ether.” The Nasmyth willow leaves are the reservoirs of the solar vital energy, the real sun being hidden behind the visible sun, and generating the vital fluid, which circulates throughout our System in a ten-year cycle.

The old Aryan sang that Surya “hiding behind his Yogi, robes his head that no one could see.”

The dress of the Indian ascetics is dyed a red-yellow hue, with pinkish patches on it, and is intended rudely to represent the prâna in men’s blood, the symbol of the vital principle in the sun, or what is now called the chromosphere, the “rose-coloured” region.

The nerve-centres themselves are of course provided by the “food-sheath” or dense body, but Prâna is the controlling energy which acts through the nerve-centres, making the food-sheath obedient, and fashioning it for the purpose which the I, seated in the higher intelligence, demands.
[6:55:06 PM] Thuan Thi Do: https://www.google.com/search?q=chromosphere&rlz=1C1KMZB_enUS528US528&oq=chromosphere&aqs=chrome..69i57j0l5.984j0j4&sourceid=chrome&espv=210&es_sm=122&ie=UTF-8 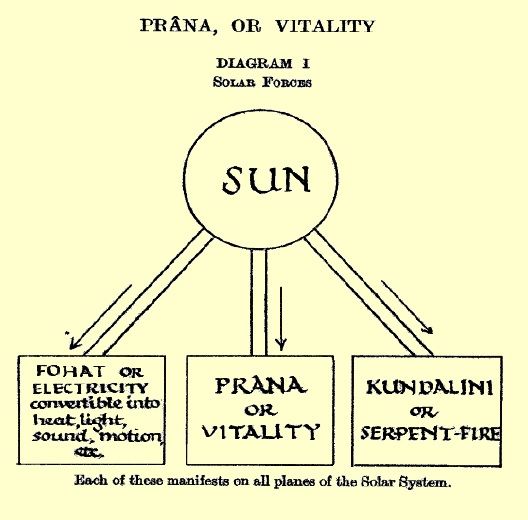