The chakrams are often spoken of as corresponding to certain physical organs, those organs, in fact, which are the nearest to them; but, as already mentioned, the chakrams themselves are not in the interior of the body, but on the surface of the Etheric Double.

The list of the chakrams and their names is as follows:Numbers 8, 9, and 10, connected with the lower organs of the body, are not used by students of the “white” magic, though there are certain schools in existence which make use of them. The dangers connected with them are so serious that we should consider their awakening as the greatest of misfortunes.

Numbers 8, 9, and 10, connected with the lower organs of the body, are not used by students of the “white” magic, though there are certain schools in existence which make use of them.
The dangers connected with them are so serious that we should consider their awakening as the greatest of misfortunes.

The flow of vitality into or through any chakram is quite separate and distinct from the development of the chakram brought about by the awakening of Kundalini, which will be described in Chapter XIII.

We shall now proceed to study each of the seven chakrams in turn, examining its structure, appearance, function, and the faculties associated with it. For reasons which will presently appear, it will be convenient to commence with the third centre, that situated near the spleen.

The spleen centre has six spokes, and therefore the same number of petals or undulations. In appearance it is specially radiant, glowing and sun-like.

This centre is unique in this, that it has the all-important function of absorbing the Vitality Globules – from the atmosphere, disintegrating them, and distributing the component atoms, charged with the specialised and transmuted Prâna, to the various parts of the body. 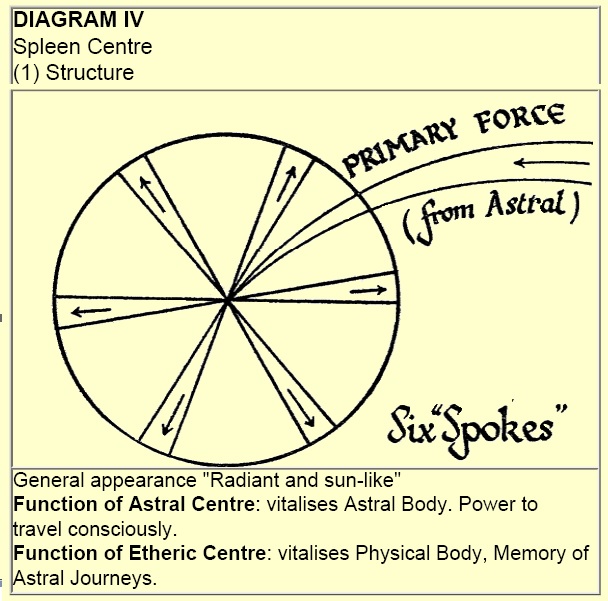 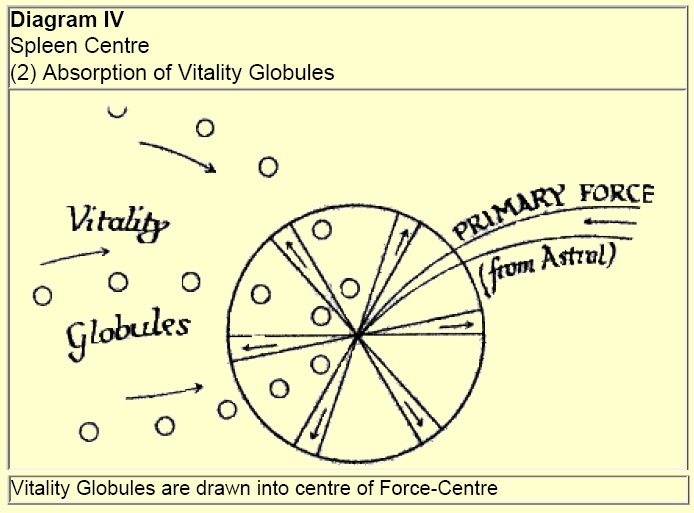 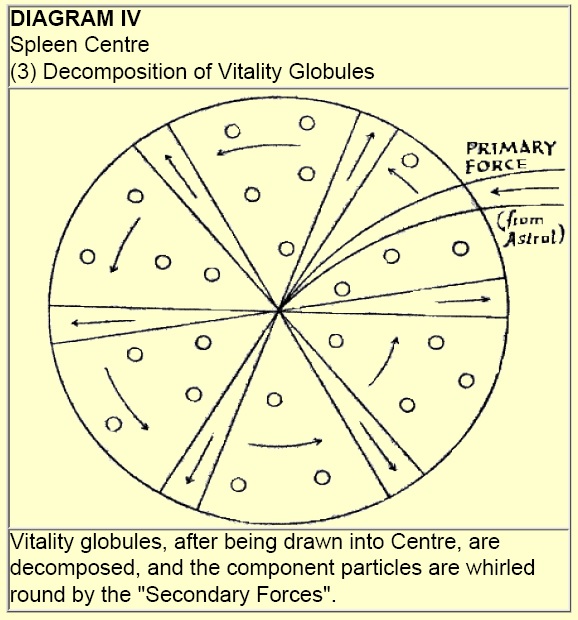 The Vitality Globules are first drawn into the spleen centre: then they are broken up into seven component atoms, each atom charged with one of the seven varieties of Prâna : these atoms are then caught up by the rotating secondary forces and spun round the chakram.

The seven different kinds of Prâna are coloured thus:

It will be observed that the divisions are not exactly those to which we are accustomed in the solar spectrum, but resemble rather the arrangement of colours seen on higher levels in the causal, mental, and astral bodies. The indigo spectrum is divided between the violet and blue rays of Prâna, whilst the red of the spectrum is split up into dark red and rose-red Prâna.

Each of the six spokes then seizes on one variety of atom and despatches it to the chakram or part of the body for which it is needed. This accounts for six kinds of atoms only: the seventh variety, - that coloured rose-pink, is despatched through the hub or centre of the spleen chakram itself, whence it is distributed over the whole nervous system. These rose-coloured atoms are the original atoms which first drew round them the six others to form the globule.

The atoms which bear the rose-coloured Prâna are clearly the life of the nervous system, and it is this variety of Prâna which one man may give to another, as described in Chapter XIII. If the nerves are insufficiently supplied with this rose-coloured Prâna, they become sensitive and intensely irritable: the patient finds himself restless, and the least noise or touch is agony to him. Instant relief may be afforded him by some healthy person flooding his nervous system with a supply of rose-coloured Prâna.

Although there are seven distinct kinds of Prâna, there are only five main streams, as described in some Indian books, because after issuing from the spleen chakram the blue and violet join into one stream and the orange and dark red join into another stream. The streams leave the spleen centre horizontally. 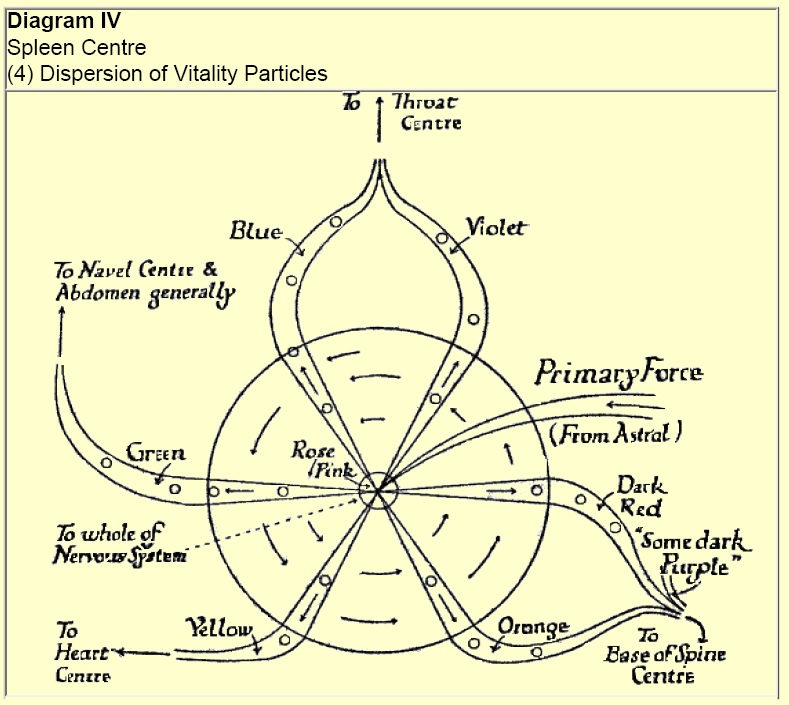 The colours of the streams and their destinations are set out in the following table :

As the various kinds of Prâna – charged atoms are distributed where required, the charge of Prâna is withdrawn from them, precisely as a charge of electricity might be withdrawn. The Prâna gives life to the Etheric Double and, through that, to the dense body, the degree of health of the parts of the body being largely determined by the volume of Prâna distributed. The bearing of this significant fact on the maintenance of physical vigour and the cure of disease is clearly of very great importance and will be more fully considered in the section devoted to Healing and Mesmerism.

The atoms bearing the rose-coloured Prâna grow gradually paler as they sweep along the nerves and part with their Prânic content. They are eventually discharged from the body through the pores of the skin (as well as in other ways), forming what is called the health aura, a pale bluish-white emanation, of which a plate is given in Man, Visible and Invisible, page 128.

In a man in vigorous health the spleen does its work so generously that considerably more of the particles charged with Prâna are present than the man requires for his own use. These unused particles are discharged from the body in all directions, through the health aura, along with the particles from which the Prâna has been extracted. Such a man is thus a source of health and strength to those around him, constantly though unconsciously shedding vitality on any who may be in his vicinity. This process may be considerably intensified by those who definitely set themselves to heal others, by mesmeric passes and otherwise, as we shall see more fully in a later chapter.

In addition to these particles just mentioned, it is also well known that small particles of dense physical matter are continually being thrown off from a man’s body, in insensible perspiration and in other ways. A clairvoyant sees these particles as a faint grey mist. Many of the particles are crystalline in form and therefore appear as geometrical figures; one of the commonest is that of salt, or sodium chloride, which takes the form of cubes.

A man on the other hand, who is unable for any reason to specialise for his own use a sufficient amount of Prâna, frequently and also unconsciously acts as a sponge, his physical elemental drawing vitality from any sensitive person who happens to be near, to his own temporary benefit, but often to the serious injury of the victim. This phenomenon largely accounts for those feelings of weariness and languor which come over one after being near people who, not being very strong themselves, possess this unfortunate vampire-like faculty of draining others of vitality. The same thing may happen, often in an aggravated form, at spiritualistic séances.

The vegetable kingdom also absorbs vitality, but seems in most cases to use only a small part of it. Many trees, especially the pine and eucalyptus, extract from the globules almost exactly the same constituents as does the higher part of man’s etheric body, and reject any superfluous atoms charged with rose-coloured Prâna which they do not themselves require. Hence the proximity of such trees is extremely beneficial for people who are nervously depleted.

The health aura, consisting of these particles ejected from the body, serves the useful purpose of protecting the man from the invasion of disease germs. In health the particles are thrown out through the pores in straight lines, at right angles to the surface of the body, giving to the health aura a striated effect. As long as the lines remain firm and straight the body seems to be almost entirely protected from the attack of evil physical influences, such as disease germs, the germs being actually repelled and carried away by the outrush of Prânic force. But, when on account of weakness, over-fatigue, a wound, depression of spirits, or through the excesses of an irregular life, an unusually large amount of Prâna is required to repair waste or damage within the body, and there is consequently a serious diminution in the quantity radiated, the lines of the health aura droop, become erratic and confused, the system of defence is weakened, and it is then comparatively easy for deadly germs to effect an entrance (vide M., V., & I., p. 132, Plate XXV).

In The Science of breath, translated by Râma Prasâd, it is stated that the natural length from the body to the periphery of the “halo” of Prâna, is 10 “fingers” during inspiration of the breath and 12 during expiration. At other times the lengths are stated to be as follows: in eating and speaking, 18; in walking, 24; in running, 42; in cohabitation 65; in sleeping, 100. A reduction in length is said to result when a man overcomes desire, gains the 8 Siddhis, etc. It seems probable, though by no means certain, that the “halo” mentioned is the health aura. The term "fingers" here means, according to the method of reckoning used in India, not the length of a finger but with width.

Both etheric matter and Prâna are very readily amenable to the human will. It is possible, therefore, to protect oneself to a considerable extent from hostile influences mentioned above, by making an effort of the will to check the radiation of vitality at the outer extremity of the health aura, building it there into a wall or shell which will be impervious to disease germs and also prevent the vitality from being sucked away by any one near who has the vampire tendency.

With a little further effort a shell may be made impervious also to astral or mental influence.

The question of etheric shells is so important that it will be necessary later on in this book to enter into it rather more fully than we have done here, where we are dealing purely with the health aura.

The development of the spleen centre enables the man to remember his astral journeys, though sometimes only very partially, the faculty associated with the corresponding astral centre being that of travelling consciously in the astral body. Those vague memories, that most of us have, of blissful flights through the air are often due to slight accidental stimulation of the spleen chakram.

It maybe mentioned, in passing, that the astral centre corresponding to the spleen also has the function of vitalising the whole astral body.